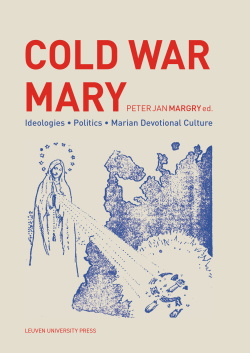 It is written on the back cover of Cold War Mary that this book will attract readers interested in religious history, Cold War history, and twentieth-century international history.

For me, the book also sheds light on the mastering of the art of storytelling. As the various chapters in this 399 pages volume are not just exclusively focused on the main narrators such as the pope, the Vatican, the diocese and the national Churches. But also focuses on the devotional actions and stories of the global Catholic community, the Marian politics and prophecies.

First of all, there is nothing wrong with telling stories. Even when they integrate moral and/or  spiritual components, as a book entitled Cold War Mary and emphasizing the new role of Our Lady of Fátima, which occupies a central position in this study, suggests.

“Perhaps the most important factor in affirming the new role of Fátima was the fact that the reigning pope, Pius XII, had been consecrated a bishop on the very day of the first Fátima apparition , May 13, 1917. He was therefore strongly personally committed to the mission of Fátima.” 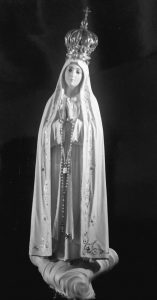 José Ferreira Thedim, Our Lady of Fátima, 1920, with crown installed in 1946. [Collection of David Morgan]

A narrative set in a period (as described in the introductory chapter) of high political, strategic, military, economic and social tensions in the world in the direct aftermath of the Second World War can be successful, especially if told well, it can promote communication, can provide depth and insight into certain situations and can call for action.

“To create mass impact, the spirituel arsenal at the time was increasingly deployed via newly created organizations and Catholic Action groups, often initiated by lay persons, whether or not with the help of clerics or religious orders.”

(excerpt from Envisioning and exploring Mary’s Theater of War, Armies and Crusades, pp.43)

Four chapters in section III analyze these collective initiatives that have created a huge impact. But action is already in place as described in the opening lines of the introductory chapter, Envisioning and Exploring Mary’s Theater of War.

“In a smoothly orchestrated campaign, Catholic presses across Europe and North America brought popular, translated editions of Pope Pius XI’s encyclical on “Atheist Communism” to the market directly after it was published on March 19, 1937. His words were delivered as an urgent message to be absorbed and internalized by the Catholic community worldwide.”

The phrase “worldwide” indicates how the fabricated narrative was perceived and translated into actions such as pilgrimages, apparitions, rosary rally’s widespread on a geographical scale and detailed in six chapters in section II of the book. 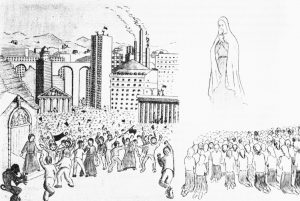 Kérizinen two-part panel drawing, according to the descriptions given by visionary Jeanne-Louise Ramonet on May 1, 1944, depicting on the left anti-religious communism, and on the right Mary protecting her devotees from communism. Drawing in Kérizinen. Messages du Christ en de la Sainte Vierge, 1938-1965 (1981), 145. [Collection Peter Jan Margry] 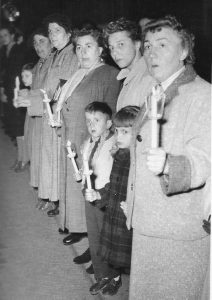 Women and children lined up along the streets watching the procession pass. [Historical Archive of the Archdiocese of Cologne] 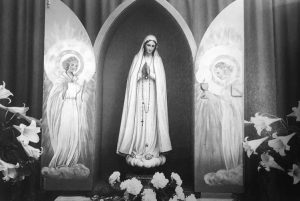 Special travel cases existed for touring statues of Our Lady of Fátima visiting private homes. Here in the house of the Stadhouders family in Oosterhout, October 18, 1954. [Amsterdam, Meertens Institute]

But when sequences of events, as in this case during the global Cold War phenomenon, are presented in a crafted narrative, the danger of manipulation and the existence of hidden agendas lurks around the corner. Like the story of the almost disappeared book entitled Pentagon of the Empire of Mary.

That’s why Cold War Mary is a layered tale of many stories behind the stories.

“The various chapters in this volume therefore take not a centralist-institutional perspective, but a popular or grassroots point of view.”

(excerpt from Envisioning and exploring Mary’s Theater of War, The Cold War, the Church and the virgin Mary, pp.11)