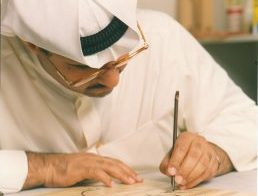 The Kuwaiti Calligrapher Ali Al-Baddah makes Arabic calligraphy accessible to a wider audience. He creates modern art by using calligraphy.  The five days workshop he lead  in the Omani Society for Fine Arts in Salalah-Dhofar is an example of this. His works were not only selected by HH the Amir of Kuwait, he was awarded several prices in the Art of Arabic calligraphy. He also represented Kuwait in several Festivals and Foreign Exhibitions and participated in International competitions. In 2002 in Iran among 2100 calligraphic works of 48 countries only 30 calligraphers were awarded. Ali Al-Baddah was one of them.

At a very early age he got interested in calligraphy. In fact his father and two school teachers encouraged him to improve his handwriting and to practice the technique, the shapes and the colours. Via books he purchased, he studied not only the writing techniques, he was also keen to know more about the history of this Islamic Art. Eager to learn he travelled to Iraq, Turkey and Iran. There he met calligraphy masters par excellence. “As the artists in the past, I learned everything from this masters and from the reading of the books. After that I followed my own path.” 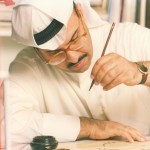 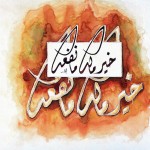 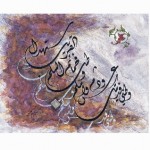 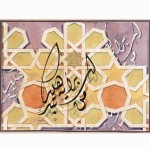 Although the development of Arabic calligraphy is strongly tied to the Holy Qu’ran, Ali Al-Baddah also uses poems, proverbs and even words without meaning. “Of course the first reaction of people when they see calligraphic art is trying to read the words. By doing so, they don’t focus on the beauty of the letter, how the line plays a crucial role, its direction, its course, its thickness and its edges,” he explains while writing. “I use Diwani and Jely Diwani, a script style developed during the reign of the Ottoman Empire. It was used in the Sultan Palaces and considered as a secret, only a few calligraphers used the script. Now it is most practised in Syria. While Kufic script, the oldest form, has more rigid rules, Diwani and Jely Diwani script offers a lot of freedom in the way of writing. You can add more or less movement in the writing, depending on your viewpoint.” While Ali Al-Baddah writes my name, it is amazing to see how a little shift and change in form or line gives more or lesser movement in my name. During the workshop one thing becomes very clear, by making modern art by using calligraphy, Ali Al- Baddah becomes completely absorbed by the space of the paper sheet. During the preparing of the paper with water and paint and by using calligraphy and floral decorations, it is the work on the sheet who guides him, who gives him the opportunity to freewheel. Very concentrated, he communicates with the sheet of paper, he goes with the flow of art and letters. “Also from mistakes I learned. Sometimes mistakes inspired me. ” And then he tells the story of a colleague who accidentally spilled coffee on his work. He was taken by surprise about the effect. His work won a prize because of this (laughed). Ali Al-Baddah want to see the beauty of the letters in each work he makes. A message he likes to give through. He still is intending to bring calligraphers from all over the world together in an exposition, so that people can see how beautiful Arabic calligraphy is. Only ….. funds are missing. (smiles) 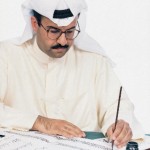 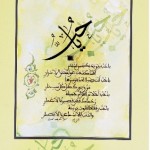 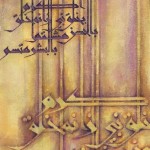 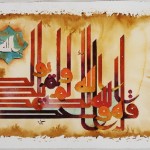