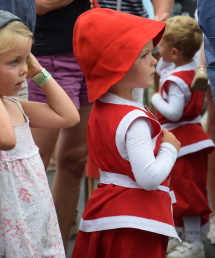 Although stilt walking is a worldwide phenomenon, in 2021 the 600-year-old tradition of jousting on stilts in Namur, my hometown, was officially registered on the Unesco list of intangible cultural heritage. Originally, the tradition dates back to the time when the city was regularly flooded by the Meuse and Sambre. To stay dry, the residents walked around on stilts. The first official document confirming the existence of stilt fighting in Namur dates back to 1411 and refers to the Count of Namur forbidding the practice for people over 13 years. That’s why the document is entitled ‘Cri (cry) du Perron.’ Nevertheless, jousting on stilts had his heyday in the 17th and 18th centuries. In the “Musée des Arts Décoratifs” with different decorating styles from the 18th century, some paintings tell stories about it. One in particular shows citizens engaged in a stilt fight when Peter the Great, Tsar of all Russians, visits Namur in 1717. Sources from the time reports that the Tsar was very fond of it. 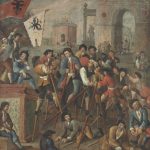 Until now, the jousting on stilts has been a very lively practice, organized all year round in Namur and in the region, mainly during popular festivals. As I saw a demonstration of  jousting last weekend during the “55ièmes Nuits de Buley de La Plante,” another medieval tradition where the river of the Meuse becomes the scene of a nautical joust between its banks.” But the main event, the “Great joust of the Golden Stilt,” takes place on the occasion of the Festival of Wallonia in front of more than 6000 spectators. Moreover, by participating in foreign activities such as in 2021-2022 in Dubai World Expo, the Namur stilt walkers show that in addition to keeping an ancient heritage alive with skills of courage, strength, enthusiasm, openness and curiosity to other cultures are also passed on. 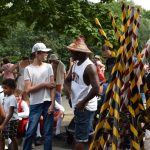 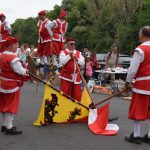 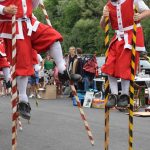 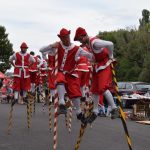 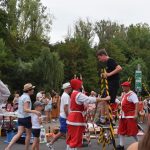 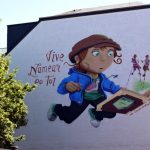 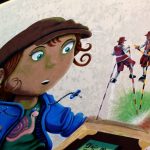 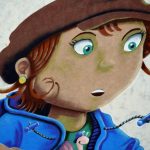 And that’s exactly the message that ‘Kahef’ alias ‘Sébastien Limbourg’ wanted to convey in his fifteen meters high fresco on the facade of the Baduelle residence on rue basse Marcelle in the old town of Namur. As part of the “Art dans la Ville” program of the city of Namur, this mural illustrates the transmission of heritage to future generations, symbolized by a child opening the local heritage book from which emerge two stilt walkers in full battle. The wonder in the child’s eyes show that the magic still works year after year, as long as we, as CUSTODIANS, are willing to make the effort to open the pages of the past while emphasizing the present and the future.

8 thoughts on “Stilt walking, a tale of ‘many’ custodians”