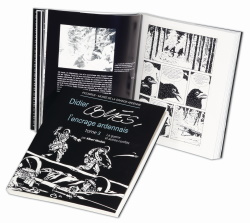 After the retrospective exhibition Didier Comès – L’Encrage ardennais (2016-2017), the Piconrue – Musée de la Grande Ardenne in Bastogne located in the Walloon Region in the Province of Luxembourg once again exhibits the works of the Master of Graphic storytelling (the 9th Art) through a temporary exhibition and a publication.

With Didier Comes. L’encrage ardennais tome 3: La guerre et autres conflits loosely translated as War and other conflicts, the author Albert Moxhet describes not only a theme that recurs in various versions in the oeuvre of his friend Didier. The theme of war is indeed a common thread in eleven works of Comès, as indicated in the title of the first chapter in this third volume. After all, for personal reasons that go back to the graphic artist’s childhood and the Second World War, Comès is strongly sensitized to this theme and in his oeuvre he deals with several facets both in historical and private contexts. 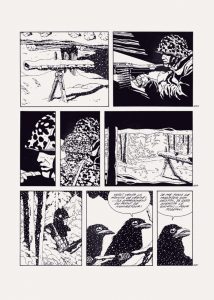 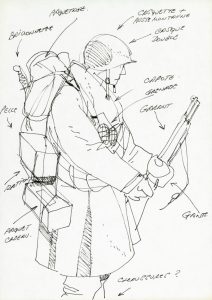 As in Didier Comes. L’encrage ardennais tome 1: Sorcellerie et croyance magico-religieuses (published in 2016) and tome 2: Nains et Légendes (published in 2018), also the layout of the third volume La Guerre et autres conflits breathes the atmosphere of the works of Didier. He is, after all, a graphic master of white paper and ink, whereby even in his texts the lettering stylistically matches the drawings. That is why the three parts of the trilogy were given the additional title l’encrage ardennais. Because “encrage” contains the word ink (encre).

In the three parts, author Albert Moxhet, friend of Comès and researcher on the traditions of the Ardennes, the Celts and the first peoples, uses the same principle. In addition to charting the ideas and the work of the graphic artist, the author places the subject of each volume in a broader context, in that of other regions, even other continents. To always to return to the way Comès looked at his subjects and themes. As expressed in the title of one of the seven chapters in the third and last volume: “L’image de la guerre et ses outils,” loosely translated as “The images of War and its tools.”

In addition to the exhibition, which will end on 6 February, the heritage of Didier Comès can always be consulted in the trilogy Didier Comès l’encrage ardennais written by the author Albert Moxhet and can be ordered in the Museum Piconrue -Musée de la Grande Ardenne, Place en Piconrue 2, 6600 BASTOGNE, 061/55 00 55 or by mail info@piconrue.be